by Kay L. Thomas
“But I will come to visions and revelations of the Lord: I know a man in Christ
fourteen years ago (whether in the body, I know not; or out of the body, I know
not, God knoweth) snatched up in this manner to the third heaven: and I know
such a man, whether in the body or out of the body I know not, God knoweth;
how that he was snatched up into Paradise and heard secret words which it is
not lawful for men to speak; on behalf of such a one will I glory; but on mine own
behalf I will not glory, save in my infirmities.”—2 Cor. xii. 1–5. This is the introduction
to the Vision of St Paul the Apostle, a text that was very popular in the Middle
Ages. Out-of-body awareness was known to writers in the ancient world as being
a state of consciousness in which visions were likely to be experienced.
I think we have to challenge the big taboo of our time – the world of the supernatural
and the soul – that former generations accepted as the core of life itself.
These phenomena that I have discussed in this book such as subtle communication,
blind-sight, clairvoyance, distance healing and the like, are really natural
phenomena if we accept our capacity for out-of-body awareness.
Out-of-body awareness, streaming through the limbic brain, enables us to view
ourselves from the outside, so to speak. This ability to view the self from the
outside is the basis for self-awareness and our survival. It enables our ancestors
to construct detailed mental maps of their geographical, stellar and social world
in order to hunt for food, predict weather events, seasons, migrations of animals,
location of plants and function in the family group and multiple connections with
other clans and tribes. Indigenous Australians call it the ‘dreaming’.
www.outofbodyawareness.com

Cover picture: Ainsley Roberts; Mangova and the round lakes 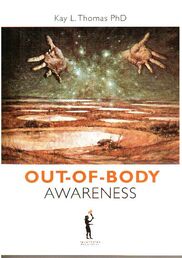 OUT OF BODY AWARENESS